Tank trouble is interesting tank battling game that is about war, tanks and destruction which enables you to test your tank battling skills. The game requires you to play against some tanks as you progress on the challenge and achieve more scores by eliminating all your enemies faster. You have complete control over your tank hence your careful guidance will ensure a successful mission. Read more about Tank Trouble game below and on our blog post right here !

How can you survive in Run 3?
Benefits of unblocked games
Tank Trouble Game

Tank Trouble is a great multiplayer flash game that appears simple but very exciting and immersive. It offers you a fantastic gameplay experience where you are exposed to tanks, wars, and destruction. Unlike most online tank games, Tank Trouble enables you to play in several playing modes. You can play the single mode where you play versus computer or in a multiplayer mode. In multiplayer mode, you can decide to play with one, two or three friends. It is a rare feature you can find from other online flash games where you can have three players playing from one computer.

Tank Trouble immerses you in deep trenches of war amongst nations. Enemy tanks surround you, and you must fight to find your way out of the cutthroat struggle scene. The goal is to blast your opponent’s tank using your vehicle as much as you can. In the single mode, your opponent tank is called Laika. Use all your fighting skills to overthrow him. You can play Tank Trouble in full screen from the site. It means you enjoy a granular view of your game. Again, several game levels that feature small and big maps. Weapons are in plenty, and you get them by hitting a special icon.

In case you want to play versus the computer, you can select the 1 Player button. For two players, select 2 Player and for three players, click on the 3 Player button. For the game controls, player one navigates using the arrow keys and fires with the M button. Player 2 moves using the E, S, D, F keys and fires with the Q button. Player 3 navigates using the mouse but fires by clicking the Shoot button. If you shoot your friend’s tank and bring it down, you shout hurray and win. Though it sounds pretty simple; it is not the case.

In the game, it is very challenging to control the tank through the intense shooting scene. It is even tedious when you are playing versus the computer, a character called Laika. Laika is a very disastrous character that can easily overpower you if you don’t fight well. In the two player mode, your aim is to shoot and kill the opponent player. The three player mode is quite challenging as you will be fighting against two players. Controlling your tank while aiming to kill the other two players can be quite hectic and requires unique fighting skills for you to win the game. You have to be vigilant in all your angles and be careful as ricocheting of bullets might blow your tank down. All in all, the game is very exciting and demands your intensive fighting skills. 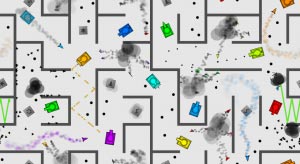 To make your game more enjoyable, you need to be armed with some trick and tips to gain a competitive edge over your enemies. Remember that every shot counts. Therefore, you need to have sufficient ammunition to keep you going. If you are fighting against Laika, ensure that you stay at a safer distance from her. Preferably, you can opt to stay next to the wall near the laser. When Laika aims at the wall, try going to the other side. Staying too close is quite risky.

Laika cannot dodge and shoot at the same time. If you decide to fire a caterpillar, remember to reserve one bullet. She can easily dodge your bullets ending up in waste. Again, ensure that the bullets in your caterpillar stay close to one another as your target might move away. When firing, be vigilant not to fire yourself. You can shoot by using the laser directly as it cannot bounce easily.

To achieve the Doggy Bag, you consider creating three mazes with narrow but long corridors with open spaces. Furthermore, you will have to shoot cautiously so as not to waste bullets. When your opponent is out of bullets, don’t waste time killing him. Also, dodge all your opponents bullets or else your tank will be blown down. A good way of defending your tank is by leading it to the maze wall. Here, bullets will most likely miss you. By being more careful, you can survive longer.

Use the additional bonuses that pop up on the screen to help improve the intensity of your firepower. Consider picking them up for the betterment and upgrade of your weapons.

The map is a valuable source of information when you are on the battlefield. Utilize it fully to determine the points where you can find support. The map also enables you to pinpoint which flank is weak to stop your opponent and know the location of their tanks.

Tank Trouble is a very addictive as well as an engaging game you can play at all times. You never get bored again whenever you can access it. It is one of the best flash games around. If you’ve not tried it, then you ought to.