Have you ever wondered what it is that the military does out there? Tank Trouble is an online flash game that will give you a glimpse at this. In particular it will help you get to know how war tanks are used out there. These are powerful weapons which can be quite exhilarating to operate. With this life-like game the experience is so real that you will feel as if you are on the battlefield. No matter how old you are and what your likes are, you will definitely find this game interesting. You can play it anywhere thanks to its availability online.

Unlike other tank games, Tank Trouble allows you to play alone as well as with a friend or two. You can easily choose from either player vs computer mode or multiplayer mode where you get to play against friends. When playing against the computer, your opponent will be a tank controlled by the computer named Laika.

The objective of the game is to destroy the opponent’s tank with yours. There are various levels in the game with increasing hardships as you advance from one level to the next.

For controls, each player uses different keys to control his or her tank. The first player (red tank) uses arrow keys to aim at the corresponding directions and uses the “M” key to fire. The second (green tank) uses E, S, D and F keys to point and the Q key to fire. The third player (blue tank) moves the mouse to control the direction of shooting and clicks to shoot. When playing against the computer your tank will be red in color. To control it use the arrow keys to move and space key on the keyboard to shoot. With such a simple game play this game is ideal for the young and the old alike.

The player has a variety of weapons to choose from. These will appear on your screen and you will need to hit the icon with a special weapon to get them.

Why play this game?

When it comes to thrilling games, this tops the list. It brings forth endless fun with many computer-generated levels that keep coming. No matter how good you get the next level will always be a challenge. As you keep shooting at your opponents the euphoria of the game keeps building up. Before you know it you will be addicted to this game. This is not a bad thing because you will have something to look forward to doing during your free time.

The game comes with many maps and so you are sure that there are a lot of places to explore. You are also not limited on the strategies you can use to fire at opposing tanks. You can do whatever you want ranging from bouncing the projectiles off walls to just shooting directly. However be careful with the strategy you use because you could end up shooting your own tank.

The one of a kind multiplayer thrilling game has so much to offers its players. You get on the battlefield with your tank and fight to against fierce enemies to remain alive. Whether you like playing the game at home, school or the office there are many ways you can get the most out of it and have as much fun as possible. 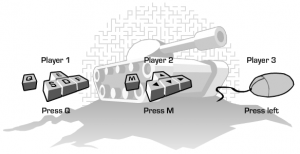 These will help you be able to move around in the labyrinth with ease. To move forward slowly hold the E and D or up and down keys simultaneously if using the keyboard or if using the mouse place the cursor close to the tank. When would you want to apply this? When on a booby trap moving forward slowly will help you dodge an oncoming bullet without offsetting the trap.

Using the mouse for control can be difficult and gives your opponents an upper hand. You can however make the most out of it. Among the most common challenges is the fact that you cannot drive backwards. Instead of trying to do this, run from any opponents shooting at you then turn back 180 degrees and fire back. You cannot run away and shoot at the same time anyway.

For easy navigation through the maze, turn away from a turn before turning towards it so that you will be close to the inside of the turn which reduces the distance you have to cover. To make U-turns quickly, turn as you drive forward and reverse when about to hit the wall and continue rotating the tank. This is much faster than the usual style of going in one direction, stopping and rotating and driving in the other direction.

To get all the action that comes with Tank Trouble turn the volume up. This way whatever misses the eye is noted by the ear and you will not miss out in any action. You will notice whatever weapon is thrown your way and be able to dodge it.

If you want to be sneaky and catch your enemies unaware settle for the gray colored Camo which is less visible. Though it may not be as stylish as other tanks it gives you an upper hand when your enemy is distracted. To easily finish your enemy off, shoot bullets from different angles. Avoid caterpillar shots (3 or more bullets in shot close to each other) since these will shoot at the same place. Remember that you are slower than any bullet so never try to outrun it. Instead, make use of corners.

Have you run out of bullets? Run away as fast as possible. As a rule of thumb avoid bumping into walls as they will slow you down. You can offset booby traps if you think it will help. When an enemy runs out of bullets run after them as fast as possible and shoot to kill. If worse comes to worst and there is no escape, do not die alone. Shoot in all directions so that you get others and bring them down with you.

There are many people out there who sell cheats and hacks to help you gather more armor in Tank Trouble. This is really a worthless expense and a waste of time. With the above tips you can get to the top of the leaderboard without a hack or a cheat. A genuine win is more fulfilling.

To sum it all up, Tank Trouble is an amazing and thrilling action-packed game. It is easy to play while at the same time being challenging so you will not get bored.